The next part of Urban Diagnosis:38 (Natalie Bennett)

Whilst a neighbourhood lies dormant in wait of its new built environment is it possible that it can reawaken sooner to evoke a new memory.  Using a temporary urbanity to write a pre history into people’s memories, initiating a new lease of life that leaves a legacy within the long awaited new masterplan.

Time has no limits.  Within all history and present in all future to come, any place within time is temporary.  When dealing with today and with urban environments, which continually evolve and are therefore consistently in a period of transition.  Temporary comes from a different scale of measure, a scale relative to human life.  For any of the local population born after the demise of Bridge Street will remember little more than what stands today. Temporary is also is relative to the time taken to roll out a masterplan from development strategy to completed building.  If the built form of the masterplan is the permanent urbanism then temporary urbanism is something that happens before and within the timescale of this phase in evolution in urbanism, in its wake a legacy can be left in the character, legibility and memory of place. 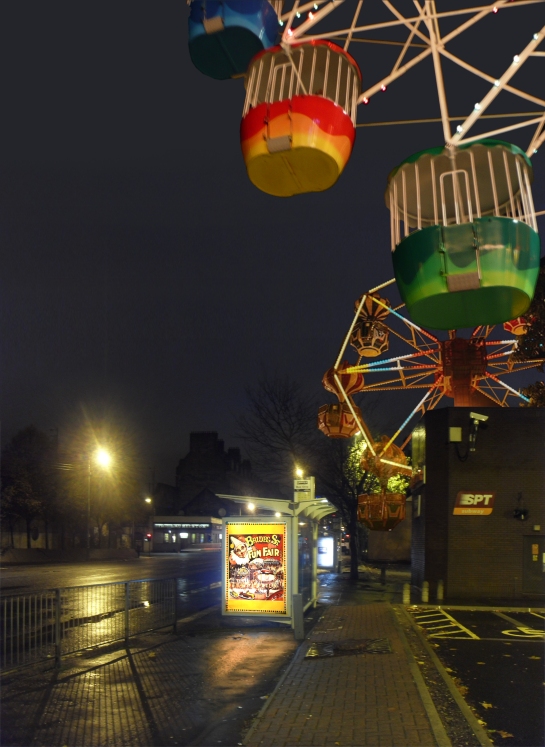 Site:  Bridge Street has been subject to the ‘two kinds of urban void,’ one from the nineteenth century infrastructure and areas of industry; another of the sprawling settlement of the post war era.  Neither of which have a recognisable role any more, left without identity having left so long that it has fallen into a sterile state.  As a result, the neighbourhood has been left with a limited role of significance within Glasgow, its only key activity being the transport interchange at the underground station linking with the 38 and other bus routes.  Neighbourhoods can take generations to establish, if the temporary urbanity is a temporary landmark acts as the pre start for the new leaving a legacy once its physical presence is no longer required.

The vision of situating tall land marks as a piece of temporary urbanity, plays on many ideas but primarily on building an identity and character of place that fore runs a new master plan. Inviting an activity to the area that lends to a new legibility, memory and legacy.  That the Naught-order should be imposed as a less obtrusive introduction to the first and second-orders delivering the final urban landscape.  The ambition is to create a comfortably familiar urbanism where no period of adjustment is required because it has and will continually evolve at a rate that makes it feel familiar.  Creates a cycle that is fed by the people and in turn the people by the place lifting the veil of governance revealing the authentic neighbourhood underneath.

I own all the rights to all the pictures and text written on this blog and cannot be reproduced. Any content from elsewhere is clearly credited.